Rise Of The Ex-Muslim

A phenomenon previously considered anathema to public discourse in Pakistan is slowly gaining traction among the urban, literate, 20-30 something demographic. ‘Atheism’, or the lack of belief in the existence of God or gods, is appealing to young folk growing up in the shadow of war-time Pakistan, amidst a battered national ego, and mass media proliferation that suggests we live in the twilight zone far removed from occidental peace and prosperity. For a long time it was convenient to blame our predicaments on the greed & gluttony of politicians. This narrative is slowly shifting to the lament of ‘God Has Forsaken Us Hence Doesn’t Exist’.

On the surface such a counter-culture, though reactionary, seems sociologically valid. After all, the calamity that threatens to tear this nation apart at the seams is religiously motivated, misplaced or otherwise, and represents a reprehensible distortion of Islam that favors militancy over spirituality. Things gets hairier however when this counter-culture exhibits an unhinged vitriol similar to those of the villains, under the pretext of progressive thinking. Such conversations by Pakistanis, all over the internet and particularly Facebook, revolve around debasing, blaspheming and debunking the veracity of the holy text and traditions.

Bashing Islam, though en vogue, ignores a fundamental fact. Islam itself is simply a word, pointing to other words, that point to others still. What lends all these words divinity & power (good or bad) is the Muslim Ummah (or entire community). For a belief system to exist, there must exist believers. Many old world religions, mostly pagan, descended into anonymity over time because there was no one left to praise their gods. Naturally if the philosophy and compass of Islam have been miscalibrated, look no further than the Ummah, now 23% of the world population, for culprits. However like good political spin, if your mind is bombarded enough times by a certain point of view, it appears fact. Islam now is the ever-looming black cloud, the boogeyman, a convenient target for trolling iconoclasts.

I consider myself to be a believer in the supreme deity, although admittedly with a tepid approach to Islamic rituals, and don’t find the two to be mutually exclusive. I inherited my faith from my parents, and like many, griped and groaned over the years about the unfairness of it all. I still do. At no point however did I feel the need to renounce the existence of a grand design or a grand designer. Call it God, Christ, Allah, Yahweh or Brahma; the empirical evidence for planned creation is overwhelming, which randomness or chance cannot begin to explain.

The internet cup runneth over with arguments both for and against creationism. I myself find the following anecdote to be most apt. When the first moon rocket took off from Cape Canaveral, two U.S. scientists stood watching it, side by side. One was a believer, the other an unbeliever. The believer said, “Isn’t it wonderful that our rocket is going to hit the moon by chance?” The unbeliever objected, “What do you mean, chance? We put millions of man hours of design into that rocket.” “Oh,” said the believer, “you don’t think chance is a good explanation for the rocket? Then why do you think it’s a good explanation for the universe?

Statistically around 2% of the world’s population declare themselves atheist. A further 16% profess irreligiosity. That means well over two-thirds of mankind worships God or gods, or some manner of higher power. Labeling us stupid, or ‘sheep‘, is highly patronizing and sanctimonious. Most people without an axe to grind (for God being a poor wish-granting fairy I suppose) find faith to be a source of comfort and hope in an uncertain existence, for whatever lies here and beyond.

Extremism is a form of psychosis masquerading as existential purpose. Why is it that serial-killers like David Berkowitz (aka Son Of Sam) who claim God instructed them to kill in cold blood are not labelled as Christian fundamentalists, yet lunatics like Nidal Hasan and his ilk are poster-children for the Islamic faith? Just because he shouted Allah-u-Akbar before bringing on the carnage? Or that a meagre selection of similarly misguided souls praise his acts as righteous? Would the aftermath of a suicide bombing be any less horrific if the terrorist sang Auld Lang Syne before going boom?

Islam has also become synonymous with a new-wave of deranged demagogues i.e the Osama bin Laden’s, Mullah Omar’s & Al-Baghdadi’s of the world. The popular consensus is these men and their minions are out of reclaim the world in the name of Allah, by jihad against the infidels. Pick the scab of rhetoric however, and it reveals the blowback from the post-9/11 New New World Order. The forced remodeling of tribal nation states (that make up most of the Islamic world) along secular western lines is unsurprisingly begrudged. The negative energy contained within these young populations, seeking to reclaim their socio-political identities, is manifesting itself as a religious specter; ready to take apart and glue back an Islam that serves their agenda .

Much rated by Pakistani atheists is the egalitarian secularism of modern-day Scandinavia, as a model to emulate. What they conveniently neglect is timeline and circumstances. Sweden, for example, was Christianized in the 1100’s and became a Catholic country. It then embarked on a religious crusade to Christianize Finland and other Baltic states.Subsequently in the 1500’s, Sweden transitioned to a firmly Protestant state, even taking part in the European 30 Year War to defend the faith. In fact right until 1858, conversion to Catholicism could be punished by exile. Present-day Sweden was not an overnight occurrence, despite a high degree of ethnic homogeneity and a long unified national history. Pakistan has neither.

Nor can Muslims take to the streets defending their humanity every time a madman cloaked in the Islamic dogma sheds his. Modern life is tough, nobody really has the time. Conversely, the Pakistani ex-Muslim penchant for spending an inordinate amount of life force passionately rebutting and refuting something they no longer subscribe to is bizarre. Faith is part of the human condition, as is lack thereof. Religion over millennia has been both the darkness and light to philosophical discourse, a crucial cog in the wheel of existentialism because it hypothesizes the meaning of life being inextricably tied to death. That is a powerful argument, despite hanging in limbo since dead men tell no tales, but one fueling intellect rather than, as atheists claim, diminishing it.

The writer can be reached at cras.mnoor@gmail.com

Armenia war crime: UN, Amnesty International should stand up for human rights
From conflict resolution to conflict explosion
The Turkey-Russia Role in the Azerbaijan-Armenia Conflict
The Covid-19 Pandemic Has Not Flattened the ‘Terrorism Curve’
Your Amazon Package, Courtesy of a Globalized Corps of Sailors
Silence Descends on Social Media in Turkey
Erdogan: An Aspiring Caliph
Macron’s ‘Savior Complex’ Is Not Helping France’s Former Colonies
Is Erdogan About to Make Turkey a More Dangerous Place for Women?
The Middle East Is Set for Big Changes If Joe Biden Wins the White House
The views expressed in this article are those of the author and not necessarily those of The Lahore Times.

Celebrate with iShopChangi on its 7th anniversary by scoring fantastic deals across categories, including top wine & spirits’ brands. With sitewide promotions, weekly flash deals and product highlights to look out for this November, shoppers can save up to 50% off with every purchase on top of enjoying duty-absorbed prices.

SINGAPORE – Media OutReach – 19 OCTOBER 2020 – What better way to usher in the 7th year anniversary than with an abundance of promotions, product specials and flash deals on your favourite beauty products, electronic gadgets and alcohol brands? In true fashion, iShopChangi will be featuring coveted deals for ardent shoppers, with sweeter deals in store during their 11.11 specials this coming November.

It’s never too early to kickstart your shopping extravaganza, especially since the year-end festivities are just around the corner. Tick items off your wishlist by scoring up to $150 off on your favourite products and brands – from beauty and electronics to fashion apparel and wines and spirits.

Nothing like a good ol’ tipple to put you in that holiday mood! Shining a spotlight on top Wines & Spirits’ brands this anniversary, there is no better time to splurge on your favourites – especially with new arrivals and mega deals going for up to 50% off. Fastest fingers get flash vouchers worth 15% off every Wednesday at 12PM, for a limited period.

Some of the new arrivals include traditional Japanese liqueur and rice sake classics like CHOYA and YOPPARI HANAOMOI JUNMAI DAIGINJO. Fans of Japanese Whiskeys can get their hands on cult-favourites HIBIKI and YAMAZAKI. In lieu of 11.11 sales, tipplers can revel in upsized discounts and deals on their go-to spirits, with a ‘1-for-1’ special.

If you are a UOB cardholder, you can enjoy 10% off your deals all-campaign long on top of price discounts with code ISCUOB10.

Indulge in guilt-free shopping with sitewide promotion codes on top of duty and tax-free prices with Changi Airport’s leading e-commerce platform. With the exception of a select few items, shoppers can look forward to tiered discounts – with every $70, $270, and $700 spent, discounts of $7, $27, and $77 apply. 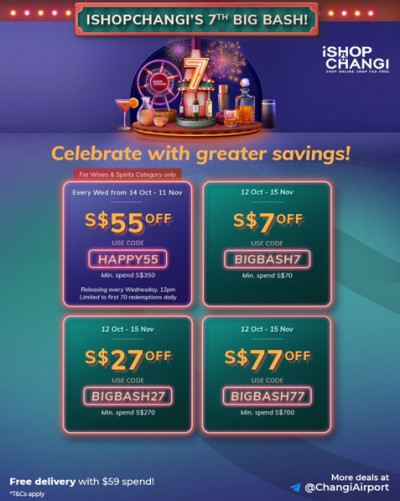 The party doesn’t end there. Exclusively for iShopChangi members, stack your savings with $10 off every $100 spent, redeemable for up to 7 purchases. Not a member yet? This is the best chance to do so! Just for the big bash, Changi Rewards is christening the deal for new members with a special first time perk of 50% off capped at $20, limited to the first 1,000 shoppers.

When it comes to incredible deals on quality products, iShopChangi’s 7th anniversary bash delivers in a big way – with stacked discounts, perks and rebates. With 11.11 sales around the corner, you wouldn’t want to miss a sweet deal like this – stay connected with iShopChangi on Facebook.

iShopChangi was launched in 2013 as an extension of Changi Airport’s promise to deliver greater comfort and convenience to travellers in its suite of airport retail offerings. Passengers can browse and purchase tax- and duty-free products across all terminals between 30 days to 12 hours pre-flight on the e-store — and choose to collect their items at Collection Centres within departure, upon arrival or have them delivered free in Singapore. Providing easy access to over 30,000 products across 900 brands and exclusives such as Changi First product launches, the site has since received global recognition with its award for Best Website — Retail Customer Facing at The Moodies: the Airport and Travel Retail Digital Media Awards 2018. In early 2020, the e-commerce store started to retail a selection tax- and duty-absorbed products to Singapore-based residents without the need to fly.